Lance is a Terrier Mix and a very happy guy!

The Humane Society for Greater Nashua (HSFN) is pleased to announce that seven puppies who were adopted from the organization will hit the national spotlight on February 1 playing in the PUPPY BOWL. The game will be featured Super Bowl Sunday on Animal Planet starting at 3PM. A record 13.5 million viewers tuned in to last year’s competition, which also featured HSFN pups, making PUPPY BOWL the #1 telecast in all of cable.

The puppies’ rescue and rise to fame is made possible by a partnership between HSFN and Alamo Rescue Friends (ARF) in San Antonio, TX. Among this year’s canine competitors are puppies Roscoe, Lance, Olive, Moses, Zane, Papi, and Theodore, who once faced uncertain futures when they were impounded at City of San Antonio shelter. They were rescued by ARF, a nonprofit rescue organization and transport, who fostered them and drove them to the Humane Society in Nashua this fall where they were cared for and adopted into loving homes. 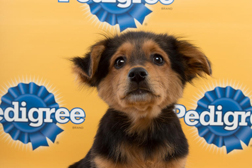 Moses is a 15 week old Corgi mix and one playful pup!

Not only did the partnership between HSFN and ARF save the puppies’ lives, but with the two organizations teaming up to bring these 7 puppies to PUPPY BOWL XI, it also gave the puppies the opportunity of a lifetime: to show the nation just how adorable and talented shelter dogs are!

Three of these adorable pups made the starting line-up and the others will join in. We’ll see if these puppies are up to the challenge! Papi, a corgi mix, has been diligently working on his fetch skills. His brothers Zane and Moses are also taking to the field though it remains to be seen which sibling will prove to be the strongest athlete on game day. Theodore, a retriever mix who was born blind in one eye, is confident that his quick reflexes and endurance will serve him well on the field for the big game!

Visit AnimalPlanet to view the entire roster of pups playing. All the dogs in this year’s PUPPY BOWL come from shelters and rescue groups across the country. Both HSFN and ARF hope that viewers will be encouraged to cheer on Roscoe, Lance, Olive, Moses, Zane, Papi, and Theodore on February 1 – and that they’ll choose to adopt their next furry friend from a shelter or rescue group so that more homeless dogs will have the chance for a happy life.

About the Humane Society for Greater Nashua:

The Humane Society for Greater Nashua provides for and protects abandoned, stray and owner released pets by connecting them with new families. Each pet that enters the shelter will receive a full medical and behavioral evaluation, is spayed or neutered, groomed, given needed vaccines and appropriate medical care. During their stay all pets have a warm bed, toys, plenty of food, and personal care until they are adopted. The shelter serves approximately 2,000 pets every year. To see the pets currently available for adoption, please click here.

Alamo Rescue Friends is an all-volunteer rescue transport organization that works to save the lives of San Antonio’s impounded strays. More information is available at their website.