Meet Keebler, Our First Shelter Dog to Benefit from a Wheelchair 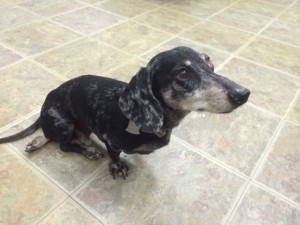 Keebler is an 8 year old Dachshund who has been here at the Humane Society since March 29. He has been receiving lots of love and care, but he needs more. He was found stray in Nashua and brought to us by a caring citizen who thought he had been hit by a car. You see Keebler’s rear legs are paralyzed and they drag on the ground behind him. Thankfully he was not hit by a car, but his paralysis is likely caused by extensive chronic disc disease, which is often seen in this breed, though he spinal x-rays to confirm the extent of the disease. In addition this little guy needs surgery on his left eye as he’s suffering from something commonly called “cherry eye,” which is a small red mass in his eye that impairs his vision. The mass is a prolapsed tear duct and can only be surgically repaired by a specialist. He also has severe dental disease.

In the short time Keebler has been with us at the Humane Society, we’ve seen his zest for life regardless of his hardships. He is happy, enjoys cuddling in his blankets, and loves being around people. We can’t wait to see how much his personality shines once we’re able to provide him the care he needs. 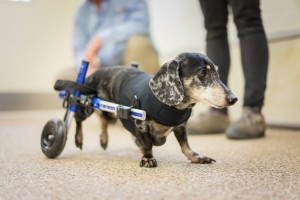 The use of Keebler’s rear legs likely will not return, but thanks to a local New Hampshire company, HandicappedPets.com, he has received a free wheelchair to help him regain his mobility. With one problem solved, we’re reaching out for support to help cover the cost of the eye and dental surgeries. We need to raise at least $2,500.00 for the surgeries and x-rays. Once he is fully recovered this happy little pup will be available for adoption and a healthier, happier new life with his forever family. We’ll keep you posted of his progress.

Thank you to everyone who donated to our Go Fund Me page for Keebler’s Surgery! In just 1 day, we exceeded our goal and have the money needed for his surgeries!

We’re very appreciative of these donations and the money remaining after his surgeries will be placed in our Abby Fund. It is a donor designated fund that provides life saving medical care and surgeries for pets at our shelter giving them a second chance at life. With 2,000 pets in our care annually, our Abby Fund quickly becomes depleted and these gifts will be put to good use to save lives. We expect Keebler will have eye surgery this week and we’ll be sure to keep you updated. Thank you! 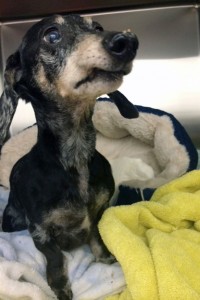 April 22: Keebler was taken to a dental surgeon in Massachusetts early this week. He had 16 teeth removed and two oronasal fistulas repaired during his visit. It was a long and an extensive surgery and Keebler came through it just fine. His surgical wounds are on the mend in our care, and he is looking to be back on his feet (and Walkin’ Wheels®) in a couple of weeks. Thanks to everyone for their concern and well wishes for this special pup and of course to the many people who donated through Keebler’s Go Fund Me page for his surgery. Keebler is being fed soft food by hand right now. We took this photo during his dinner, and he was very focused on eating. His spunk is returning.