In early 2017, my now-fiancé and I had decided it was time to add a second dog to our pack.

Lola needed a friend and we wanted to find her the perfect companion. We finally visited HSFN after seeing Ivy’s picture on their site for a few weeks. I couldn’t believe she was still there – and she had been listed as being at the shelter since July 2016. We went to meet her on a Sunday afternoon, and I remember the day very well. When we got to HSFN, we were told that Ivy was visiting with a woman already and she was likely to go home. Long story short, their match didn’t work out that day, and we were invited to sit with Ivy as her prospective family. 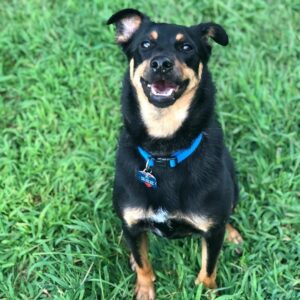 We went into the training garage to sit with Ivy and see if she was a match for us, and what an experience that was. She was completely indifferent to us and it was clear that she would have liked nothing more than to melt into the floor and not have strange people looking at her anymore. We threw her some treats that she continued to ignore. We sat with her for about 15-20 minutes and made no progress with her. Ryan and I talked about the idea of adopting her. Our first rescue had been very timid when we got her and we put in a lot of work to make sure she was comfortable and happy. We figured that if we had made one timid dog happy, we could do it a second time. So we wanted to take her home, and give her a proper family; we just had to bring our current dog back to meet Ivy to make sure that they got along.

HSFN was about 40 minutes from closing at that time, but they let us drive the 20 minutes home and pick up our Lola, and bring her back that same day to meet Ivy. I am forever grateful to Patty for staying late that evening to let us do that. When we got back, they took Lola and Ivy into the outdoor pen to see if they got along. It was love at first sight, and it was completely magical the way that Ivy transformed when she got to play with Lola. It became obvious at that point that we weren’t choosing a second dog, but rather that Lola was here to choose her dog.

We decided to make the adoption official that same day. We brought Ivy home and tried to integrate her as best as we could – we gave her a separate space from Lola for the first few days to ensure that Lola didn’t feel like we were giving away her home, but very quickly, Ivy started crying any time she couldn’t see Lola. Lola had become her security blanket and we were okay with that. She spent the vast majority of her time in her crate (by her own choice) and we didn’t force her into anything that was going to be too overwhelming. Progress was slow, but we let her take things at her own pace. Five months later when we moved into our own home, she never set foot back into her crate; it was like she knew she was finally home for good. 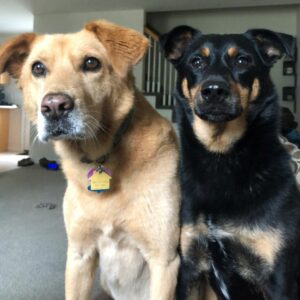 We’ve had Ivy now for almost four years. She’s an entirely different dog now. While the first two and a half years were a slow transition, in the past year she has exhibited exponential growth. She thrives when she’s in the woods hiking. She’s an excellent hunter. She loves to think, and exceeds at “thinking” toys and anything that requires mental stimulation. She’s so smart and capable of learning things very quickly, she’s very routined and sort of OCD. Ivy certainly keeps Ryan and I on our toes, but we love her very much. She’s a boatload of fun and loves to give kisses, but she’s not very snuggly and wants to love you on her own terms. We’re really okay with that. I’m so glad that she has been able to experience true love, comfort, and happiness after having such a rough start in life. I am forever grateful to HSFN for trusting us to give her the best life. We absolutely adore her.