How the training methods of our HSFN trainer, staff, and volunteers have transformed the lives of Johnny and Kirk

In the summer of 2019, the Humane Society for Greater Nashua and Pope Memorial SPCA of Concord rescued over 100 dogs from a hoarding situation.

To read more about this case in particular, please review the Golden Rescue Update blog post.
Johnny and Kirk are two dogs in particular that stuck out when trying to sum up the situation. Both dogs are extremely fearful, but express their fear in very different ways. One extreme is to show the fight response when scared; the other is to exhibit a flight response. Both of these reactions all stem from the fear response. Johnny and Kirk showed these extremes when it came to their evaluations. Being able to understand that the dog is afraid, and understand why the dog is acting in that particular way can be very beneficial when developing a plan to help reduce their fears. Below shows how the hard work of the Humane Society’s staff and volunteers was able to transform the lives of both of these dogs. 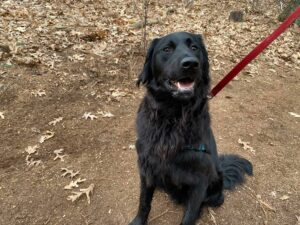 Johnny’s evaluation went along pretty smoothly, until he was introduced to a stranger and another dog, that was when his fear became apparent. When the stranger was introduced Johnny approached, but with caution. When we introduced a different kind of dog in this case a husky, Johnny’s fear level went from zero to ten in a matter of seconds. Johnny’s fear manifested in the fight reaction. Instead of cowering in a corner Johnny felt he could not escape, so his only reaction was to fight. He began to act out by lunging and barking as if he would attack if the other dog came any closer. The decision was made to hold off on putting him up for adoption, so that the staff could develop a plan for him and work with him to try and reduce some of those fears.

Kirk’s evaluation went very differently than Johnny’s. Kirk is a very timid dog who shows his fears by shutting down and cowering in the corner. In his case Kirk’s fears are shown through the flight response, he will be more likely to run and hide as opposed to coming forward like Johnny did. Kirk, like several others required more attention and time to overcome his fears. Unlike Johnny, Kirk seems to do better when another dog is around. Kirk takes comfort in having the presence of another dog around to help him gain confidence. Kirk warms up to dogs but not so much humans. In fact he is still nervous and afraid of just about everyone who comes in to look at him. He has started to warm up to staff and volunteers as he gets to know them, but this has taken months. Kirk is doing better now than when he first came in, however he still remains fearful. This is why he is required to go to a home with another confident dog to help him develop his own confidence.

Johnny and Kirk both required a plan to help them work through some of these fears.

Desensitization and Counterconditioning plans were put in place for both dogs, but what does this mean? Contrary to what one might think of in typical behavioral training, like teaching a dog to “sit”, desensitization and (counter)conditioning are processes used to change the way the dog feels about a given situation, person, or animal. Desensitization is the process of exposing the animal to the stimulus or trigger starting at a low intensity until they no longer react. Then increasing the intensity until they have a greatly reduced reaction (or hopefully no reaction!) to high levels of the original trigger. Counterconditioning is a process where the dog is presented with good things (like food) when the trigger is present, with the goal of replacing the undesired association with a desired one. Done properly, counterconditioning can replace existing mental association or feeling (such as fear of people) with a new association/feeling (such as eagerness to meet people). If successful, both desensitization and counterconditioning will lead to changes in behavior. Unlike being taught a behavior, the new behavior changes are driven by changes in the way the dog feels, rather than something they have learned.
The important thing to remember is it’s not about just trying to stop a bad behavior; it’s about trying to change how the animal feels emotionally. Imagine you are scared of spiders – would it help you if somebody threw a bunch of spiders on you and said, “don’t worry, you will be fine”. Of course not, this would only increase your fear of spiders! Instead, what if every time you looked at a spider you received a one hundred dollar bill, you begin to realize that you get money every time you looked at a spider. You would probably start changing your mind about the spiders. That is what we must start to do with the animals that are fearful of things. The goal is for them to feel that the things they thought were scary, are now not scary, and hopefully they actually become pleasant and/or desirable.

Johnny was first taught new calming behaviors in this case “sit” and “look at me”. Once he learned these behaviors, he began to look to his trainer for guidance

and answers. Once he was solid on these behaviors in multiple environments it was time to start introducing the trigger – in this case another dog. The trick to this is to find out where his reaction point is. In other words how close can the other dog get before Johnny starts to react. Once we found out where that point was we were able to start exposing him to the trigger, catching him just before he started to react, and rewarding with his newly learned behavior (which makes him feel comfortable) and treats. In other words, our staff and volunteers were now associating another dog with good things instead of as a scary thing. As he progressed, his trigger distance would become smaller until it became zero. By following this plan step by step and not rushing through it we were able to successfully change how Johnny felt about dogs. Johnny has successfully played and interacted with at least seven different dogs to this day and continues to work on his people exposure. Whoever adopts Johnny will need to continue this, as he learns very well and just needs guidance.

Kirk also needed to work on his fears, only for Kirk it was his fear of people. So in his mind people are the trigger. It can be difficult since people are the ones we need him to trust to help him work through his fears. The best thing with the extremely fearful dogs is to remember to go step by step and not rush which could accidentally “flood” the animal. Flooding the animal in this case would be trying to force affection on him when he is clearly afraid. One goal is to get the animal to start eating food, whether that is

leaving a treat and just walking away, or having the animal actually eat it from your hand. We want the dog to start to associate rewards and good feelings with people. This can take time, and he may not ever get over his fear completely. However we have made enough progress with him where he is going out for walks, will take food from most people he knows, and is even able to relax and be cuddled by some of the humans he trusts. It is those same people who he is comfortable with that can apply the desensitizing and counterconditioning as listed above. Kirk does great when other dogs are around and he can learn and build confidence from being in another dog’s presence.

So… how does this story end? 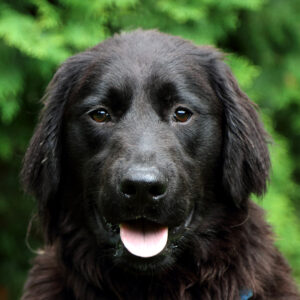 It ends for us here at the Humane Society when the right person/family comes in and adopts these wonderful animals and gives them the life they deserve. They are both very special animals who have had a very rough and traumatic life up until this point. They have been here for over eight months already and need to find a forever home. Whoever adopts these amazing dogs needs to understand that their stories may never actually end, but they will become happier if their new owners continue to guide them. They’ll learn that when things seem scary, they can look to their new friend for confidence and reassurance. And it’s very important that they not be punished for any fearful behavior. While this is true for all animals, it’s critically important for abused dogs like Kirk and Johnny.
Kirk and Johnny are miles ahead of where they once were but they need to be in a forever home to become the 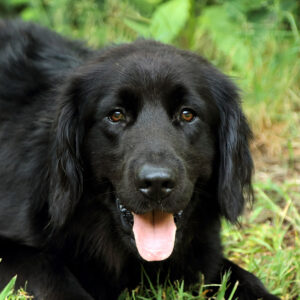 dogs they deserve to be. Johnny and Kirk are two amazing dogs who are patiently waiting for their new best friend and teacher – maybe it is you?

A very special thank you to all of the wonderful staff and volunteers who worked with Johnny and Kirk. Their love and dedication was crucial in working with these dogs, and all of our shelter pets.

Addendum: While this was being written, Kirk was adopted! We are all so happy to see him go to a home that should be perfect for him!